Baku was the host for the inaugural summer European Games. Media IP Networks was contracted by International Sports Broadcasting (ISB) of Madrid to provide Venue Broadcast Technical Management services to 3 venues covering the Canoeing, athletics and the beach volley ball, soccer and basketball and waterpolo.

The canoeing event was held 200Km away from Baku up in the Azerbaijan mountains bordering Georgia and Russia on an artificial lake created between two soviet-era dams next to vibrant Mingachevir.

Working closely with a Finnish crew (MediaPro) and a Romainian Production team, Rovik Podgor as Broadcast Venue Manager and Rupert Kelly for Media IP Networks as Venue Technical Manager rigged and delivered each and every race to Alexey Frolov’s Technical Operations Centre to be passed on to the IBC and the global audience.

A Women’s beach volleyball preliminary match during day four of the Baku 2015 European Games at Beach Arena on June 16, 2015 in Baku, Azerbaijan. 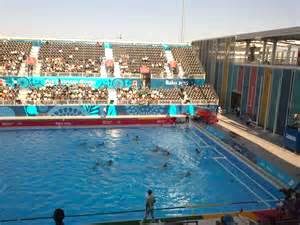 Water Polo in the temporary pool on the Baku oil beach